The difference between ‘P’ and ‘R’ Slip Resistance Ratings 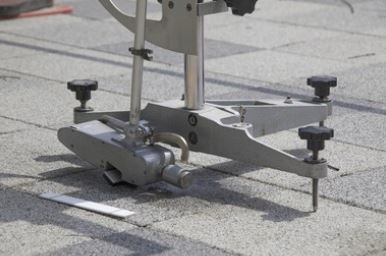 The Pendulum method measures the frictional resistance between a rubber slider mounted on the end of a pendulum arm and the test surface. The pendulum consists of an arm which rotates about a spindle attached to a vertical support pillar. At the other end of the arm is a mass (shaped like a foot) fitted with a spring-loaded rubber slider. The pendulum is locked into a horizontal position and then released so that it strikes the sample surface over a set distance with a constant velocity and energy. The pendulum continues its arc past the strike path and the height of the forward swing is determined by the energy lost due to friction when in contact with the sample surface. A pointer is pushed along by the pendulum and records the height of the swing. A reading is recorded from the scale and recorded as the British Pendulum Number (BPN). Testing is carried out at five sites with a minimum of five swings at each location or until a relatively consistent reading is achieved. The mean BPN value is calculated and converted into a classification ranging from P5 to P0 for new pedestrian surfaces.

An alternative method for determining wet slip resistance is by the Oil-wet Ramp test. This method uses a test panel prepared of the pedestrian surface which is installed on the ramp test bed. The test involves laying the test surface on the ramp followed by the application of engine lubricating oil on the test surface. A test walker is required to walk up and down the ramp wearing standard test boots while the incline is gradually increased reducing the friction between the surface and the ‘test walker’. The test is stopped once the test person considers that the angle of inclination is unsafe for walking. The test is repeated using a different test person and the mean angle is used to assess the degree of slip resistance. Subjective influences affecting the acceptance angle (e.g. variations between test persons) are limited by the use of calibration boards.